Once you have a good idea what you would like to tweet about there comes the time when you need to decide on your tweeting schedule. You need to decide how often you want to tweet as well as when, as in what time of day and which days.

With Twitter, the rule “less is more” does NOT apply. Almost the opposite is true, the more, the better. Twitter is a very fast moving platform and if you only tweet once in a while now and again, your tweets will get lost in a constantly updating stream of other people’s tweets.

As a beginner, 3 – 4 tweets per day is probably a good start, although you want to build up to around 10 tweets per day pretty quickly. This can, of course, include retweets and @replies but must contain your original content.

Tweeting more often is absolutely an option, but be careful not to tweet constantly with banal content, otherwise people will unfollow you pretty quickly. Just think about it from the recipient of your tweets’ point of view – would you want to be spammed by the same person relentlessly? Probably not.

There are different opinions among experts about the best times to tweet, but the consensus for business tweets is: during the workday, tailing off at the weekend. Ideal tweet times are usually mentioned as 9.00am to 3pm with the worst times to post being 8pm to 9am. Top days for engagement are generally Monday to Thursday, with the weekend being stronger for consumer brands. As always, it depends on who you’re trying to reach.

Once you have made those basic decisions, draw up a plan when you are going to post, what and how often. Here is an overview of Twitter schedule I used for a client earlier this year (2014).

We made sure we posted a variety of topics to appeal to the people we wanted to attract, which was the local community of business people. As you can see, only a small proportion of tweets is promotional, but there is a lot of emphasis on inspiring, entertaining and educating our target audience. We wanted them to interact with our content, which we achieved.

If you need any help creating your own Twitter schedule, get in touch by leaving a comment below or emailing me at isi@wellorganised.org . 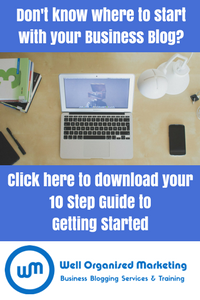